Informed Delivery takes its name from the United States Postal Service's ability to preview incoming mail for postal customers. Images taken from USPS optical character recognition sorting machines are forwarded via email to the customer on the day of delivery. But this is only half the story: An image of the other side of the mail piece, along with the front, is stored for an indeterminate amount of time and can be requested by law enforcement officials with no subpoena or court oversight.

With this framework and background in mind, the US postal customer is allowed at least a partial view of state surveillance as the surveyors might see it. As a kind of low resolution "public scanner" tied up with overlapping narratives of automation, infinite storage, and how they feed a creeping panopticonsciousness, I wish to create animations of a sort, forced through the lens of the all-seeing. Content will include surveillance related imagery appropriated from contemporary and historical subjects.

Initial tests have been made with screenshots from East German television. It was said that Stasi agents had schoolchildren "draw the clock" from their TV at home, in order to see which families were watching Western broadcasts. Today, such roundabout creativity in surveillance is scarcely needed.

UPDATE:
In late August 2020, the direction of this project changed from "subtle criticism of technology and state surveillance routes" to "desperate plea against destruction of a valuable, worthwhile federal agency." I remain critical of the USPS's current surveillance framework, but immediate preservation of the USPS is more important in the face of the incompetence and outright violence of disabling a country's postal service during a pandemic.

A majority vote seems to do less and less in this country. I call on anyone in the USPS framework to disobey and obstruct the destruction of their agency in any way that does not endanger themselves.

(This is a work in progress from May 2020 onward and updates will be made throughout the following months.) 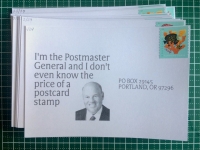